It could have been so great. With Chinese Vice Premier Liu He and his 100+ member trade delegation coming over to Washington D.C. last week, the setting would have been perfect for forging the long-awaited Chinese-American trade deal – and of course then celebrating it, with bold words of renewed friendship and entire photo albums filled with nice pictures of smiles and handshakes. And that would have only been the teaser for the much bigger show that would have followed between Donald Trump and Xi Jinping at the G20 summit in Japan next month. Instead, Donald Trump decided to unilaterally tighten existing and to impose further tariffs, thwarting hopes that a trade agreement between China and the United States can be found any time soon.

To readers of this blog, this probably was less of a surprise. We had already concluded in February that the trade tensions are only the result of a much more fundamental, political-military confrontation between the two countries, and that the conflict is likely to follow an upward zig-zag escalation path (cp. blog post "Decoupling").

In our view, it becomes more and more obvious that “deal” is not going to mean “compromise between the two”, but most probably that one side (China) would have to buckle and accept the demands of the other (USA). Quite hard to imagine for decision-makers from a culture obsessed with maintaining face, and for a country still deeply humiliated by the brutal Western harassment and bullying-for-concessions in the late 19th century.

But for Donald Trump, anything but total victory is likely to be inconvenient. The trade conflict not only serves as a useful reassurance for his voters that he adheres to his policies and promises, but potentially as a very valuable tool in the upcoming 2020 presidential elections. His latest tweets on the topic already gave an impression that he is willing to leverage it for his re-election campaign. It could be too temptingly useful for delivering a few slaps into his opponents’ faces now and then, constantly reminding the electorate that Democrats haplessly and passively witnessed Chinese expansion while he is taking decisive action to limit China’s influence.

The Economist concludes that all this has already damaged the “Chimerica” economic arrangement that worked so well in the past decade, and that it will, even if resolved soon, leave an unstable relationship between the two countries, hardly able to serve as a solid foundation for the world economy again. And hopes could be exaggerated that relocation of Chinese production to other markets will counter the losses and re-balance world trade again. Instead, it seems that key “potential relocation economies” are being hurt as well, as for example the recent (negative) development of Korean exports could indicate.

All in all, the Sino-American trade tensions have begun to scar world trade, and there is limited hope for quick relief. In consequence, this sends the wrecking ball through key elements of the good old TIC growth story told so often and indeed valid for such a long time: that the TIC industry grows because global trade grows. Let’s see which growth rates the TIC industry is able to achieve without such a major structural support and fundamental driver.

In any case, the impact on TIC as a late-cyclical industry will be delayed, but we are certain that it will be felt. We expect negative impacts to materialize in HY2/2019, potentially ruining the traditional “Christmas rallye”.

Betting on a miracle healing is not illegal, but likely to turn out to be a miscalculation, in our opinion. Therefore, we can only repeat our recommendation to finally factor all this in, and suggest to give sufficient notice after HY1 – instead of otherwise having to reveal a very big ugly surprise later.

TIC labor intensity: Not so exceptional

When explaining the subject of our work and dropping a few facts on the TIC industry, people from outside the Testing space are often astounded how labor-intensive the whole thing is. SGS alone for example employs close to a hundred thousand people globally, but only achieves a mere CHF 7bn revenue.

While this may seem perfectly reasonable for the industry insider, it indeed feels a bit odd when compared to the size of the workforces of key TIC clients. For example, Statoil/Equinor employs only around 20,000 people to produce 770 million barrels of oil worth USD 61bn of revenue, whereas DNV-GL needs 13,000 employees for inspections of ships and oilrigs worth less then USD 3bn.  And, maybe more importantly, over time and with industry growth, high labor intensity results in very large organizations that become cumbersome and difficult to manage.

Thus, we decided to have a brief look at this topic. First, we compared per capita revenues and profits for a number of leading TIC players (Graph 1; please note that we have used 2017 EUR data, because most of the “Germans” have not published their 2018 results yet). 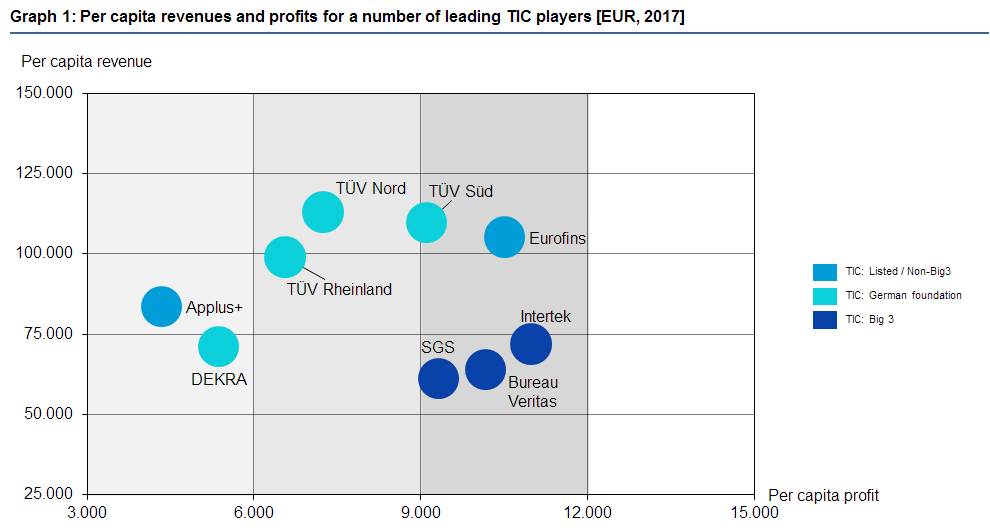 We arrive at three interesting observations:

#1: The market leaders, the “Big 3”, achieve surprisingly similar, and in particular surprisingly low, per capita revenues of only EUR 60-70k – lower than several smaller and less diversified competitors.

#2: However, the “Big 3” are very good at squeezing out per capita profit – “efficiency monsters”.

#3: In TIC, high per capita revenue need not automatically translate into nice per capita profit, as the case of the “TÜVs” illustrates.

Second, we looked at how the per-capita revenues of the “Big 3” developed in the medium-term (Graph 2, EUR k):

#4: Intertek and SGS have been able to gradually improve per capita revenue until 2012, whereas Bureau Veritas’ has deteriorated. However, since 2012, not a lot has happened in terms of further improvements.

#5: It struck us how well per capita revenues seem to be converging and in which delightful harmony Intertek’s and SGS’ have moved since 2012.

The overall implication is less alluring, though: It could be that TIC labor productivity improvement has stalled.

Upfront, considering all the fuss around the sophisticated technical skills and competence of TIC workers, we expected TIC’s per capita revenues and profits to range significantly above their low-skill service peers’ from other industries. Graph 3 below shows the per-capita profit (top row) and the per-capita revenue (bottom row), in EUR. Benchmark companies are indicated in yellow (low-skill) and light green (high-skill). 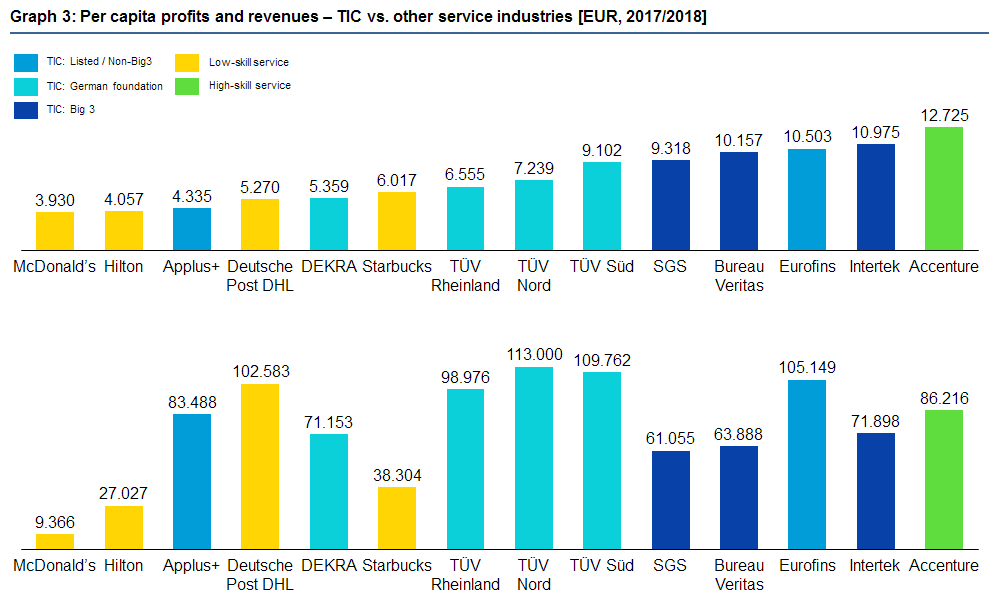 We must admit that this picture leads us to observation #5: A rather underwhelming performance of TIC in comparison to other labor-intensive service industries – both in terms of per capita revenue and in terms of profits.

Also, when looking at these figures, one has to factor in that, in a number of key segments, TIC companies are not subject to fierce competition – because prices are set by regulators or because a limited number of market participants results in favorable oligopolistic environments.

Our takeaway: In TIC, labor productivity (measured in terms of profit) does not seem to be spectacular, and the industry's established optimization aproaches might have reached a saturation point.

The unemotional, profit-minded investor might ask herself what the real difference is between selling hamburgers or coffee, renting hotel rooms, delivering mail and parcels – versus inspecting nuclear power plants, performing quality control for electronics or performing organizational audits. Our answer: The extent to which these business models have been optimized. To this end, there seems to be a lot of work, and potential, left for the TIC industry.

Georg Jellinek, an Austrian scholar and authority in constitutional law before the First World War, enriched German academics and language with the term used as headline for this article – “the normative force of the factual”.

One of the many subjects he dealt with and mulled over was the question why laws work at all, and what is needed for them to work. He reasoned that laws both require validity and efficacy to function, i.e. that they have to be commonly accepted as a binding framework and that they must be enforced. Laws that are no longer accepted, or enforced, cease to have any controlling and organizing influence on a society. Vice versa, new social norms and behaviors can establish new laws or overwrite old ones.

In essence, the term refers to the power of accomplished facts: often, once a setting has been established and is accepted by most, alternative options’ chances of success are very low. This is what Sony’s Beta/Betamax and Philips’ Video 2000 experienced during the “Video Cassette Format Wars”, eventually having to succumb to JVC’s VHS.

At the moment, some players in the TIC industry seem to make a similar experience reg. Automotive Vehicle Information Data. As discussed in earlier articles, access to this data will be vital for TICs, for future Statutory Vehicle Inspection (SVI) or SVI-type services. And in the best case, TIC players would not just be allowed to receive them free of charge, but handle them for all other parties, as an untouchable, impartial 3rd escrow – a concept labeled as the “Trust Center”.

Unfortunately, German Automotive OEMs, still a sizeable force in the Automotive world despite the Diesel scandal, looming prohibitive U.S. tariffs and a wavering approach to non-gasoline vehicles, have very well understood the importance of vehicle data. And through their association VDA, they have come up with their own concept for handling Automotive Vehicle Information Data. The initiative called NEVADA (Neutral Extended Vehicle for Advanced Data Access) was launched in late 2017 and is now starting to bear fruit.

The concept defines several different layers of data, of which less sensitive can be shared with others through neutral intermediaries/servers. Such a platform has recently been announced by Automotive Tier-1 Continental together with Hewlett Packard Enterprise, based on Blockchain technology and unashamedly labeled the “Data Monetization Platform”. It complies with the VDA’s NEVADA concept and aims at creating the basis for all sorts of digital services.

Clearly a tangible initiative – whereas all that we have heard from most of the SVI TIC players is scaremongering that car owners would lose data sovereignty without the “Trust Center”, plus a bit of last minute lamenting following the above mentioned announcement, instead of demonstrating comparable initiative.

Still, this need not mean that the TIC industry will be excluded from Automotive Vehicle Information Data. Rather, it will be invited to buy it, like everyone else.

Let’s see which price Automotive OEMs will set for the data the TIC industry is longing and campaigning so vociferously for – whether or not it is going to be high enough to make SVI suddenly significantly less profitable, so that TICs might be left with few others choices than abandoning what used to be a major cashcow and profit engine.